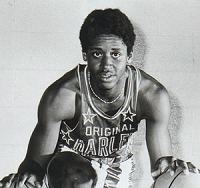 David Naves joined the NBRPA Board of Directors in 2016.

Ever since he was a kid growing up on the Southside of Chicago, Naves had a passion for basketball, science, and technology. He attended Lindblom Technical High School, one of two S.T.E.M. (Science, Technology, Engineering, and Math) high schools in Chicago. While there, Naves joined the basketball team and began his stellar basketball career. His senior year he earned Chicago All-City and Illinois Honorable Mention All-State honors and was heavily recruited by some of the top universities in the country. Naves chose to remain close to home and played collegiate basketball at Northern Illinois University.

Naves had free agent tryouts with the American Basketball Association’s Indiana Pacers and Dallas Chaparrals after his collegiate basketball career at NIU came to a close. As a kid, Naves saw the Harlem Globetrotter movie 'Go Man Go' featuring "Sweetwater" Clifton, "Goose" Tatum and Marques Haynes and was in awe of what they could do with a basketball. Never in his wildest imagination could he believe that he would get the opportunity to try out for the Harlem Globetrotters. Of the 47 hopefuls, Naves and four others were signed. His notable teammates were Harlem Globetrotter legends Meadowlark Lemon, Curley Neal, Hubert “Geese” Ausbie, Bobby “Showboat” Hall, and Jackie Jackson. Naves played over 130 games with the Globetrotters from 1971-1972, performing around the world in Canada, Australia/Tasmania, New Zealand, Fiji, Tahiti, Hawaii and New Caledonia. During his tenure with the Harlem Globetrotters, he helped establish the Globetrotter Players Union, which allowed for collective bargaining and the establishment of basic player rights, salaries, benefits and living standards.

Naves returned back to NIU in 1972 to receive his bachelor’s degree and soon thereafter began his professional career in engineering. For over the last 40 years, Naves has held engineering, management, and executive positions within the rail-car, automotive, and aerospace industries. He was also president and founder of EG&L Systems a multimedia computer based training company. He is currently employed with Alcyon Technical Services where he is the Manager - Mission Systems Engineering on a $200M contract supporting the National Aeronautics and Space Administration (NASA) Goddard Space Flight Center in Greenbelt, Maryland to plan, design, develop, test, and operate their space science missions. During his career Naves has received several patents as well as other numerous awards. Integrity has always been his guiding principle whose actions are based on the highest standards of conduct coupled with sound decision making. Naves has always been committed to providing an environment that attracts and retains talented people through: challenging work and rewards and recognition for outstanding performance. Combining these principles have allowed Naves to have a very successful career.

“As a new board member, I think my engineering and management background allows me to provide the necessary critical thinking, collaboration, and decision making needed to conceptualize the direction of the NBRPA,” said Naves.

Away from his job, Naves is very passionate about giving back to the community. He has coached and given youth basketball clinics and is actively involved with his church. Though kids marvel at his basketball skills, Naves really enjoys speaking to them about being successful off the court and encourages them to stay committed in their school studies and to have the drive to go after career goals.

From 2013 to 2015, Naves served on the Membership and Benefits Committee for the NBRPA. He thoroughly enjoyed bringing his industry experience and perspective to the committee and now he brings those same traits and leadership to the NBRPA Board of Directors.

“The future of the NBRPA is unbelievable,” he said. “I see an NBRPA where cities compete to host a Legends World Sports Conference that is attended by thousands; I see the NBA as an even more connected partner; I see the NBRPA as an organization every retired HGT, NBA, WNBA, and ABA player will want to be a part of; I see an NBRPA that has expanded programs that foster a successful transition to life after basketball, and I see an NBRPA that that has initiatives to help both our local and international communities.”

Naves also hopes being the only Globetrotter on the board will bring about even more participation and involvement from the Harlem Globetrotters alumni.

“I would like to increase retired Harlem Globetrotter membership and foster their active participation within the organization,” said Naves. “I also hope we can explore working with cooperate sponsors to build or refurbish basketball courts in areas of need in the United States as well as Africa.”

Just like in his professional and business career, Naves is sure to bring a focus and commitment on meeting the needs to not only NBRPA members but to the communities the organization serves as well.

Naves resides in Bowie, Maryland with his wife Jacqueline and they have three adult children: Erica Naves Sillmon, Lindsay, and David Gregory II.