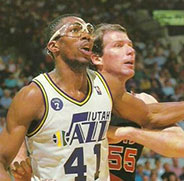 Thurl Lee Bailey (born April 7, 1961) is an American retired professional basketball player whose NBA career spanned from 1983 to 1999 with the Utah Jazz and the Minnesota Timberwolves. Bailey has been a broadcast analyst for the Utah Jazz and the University of Utah— in addition to work as an inspirational speaker, singer, songwriter, and film actor.

Bailey attended North Carolina State University and was a leader in the Wolfpack's miracle run to the 1983 NCAA Championship. That year, under head coach Jim Valvano, he led the Wolfpack in both scoring and rebounding. The Utah Jazz selected him as the 7th pick of the 1983 NBA draft. Jazz management reported that he was selected for the quality of his character, as well as the quality of his game. This was the beginning of 16 years of his playing professional basketball, 12 of those years were with the NBA.