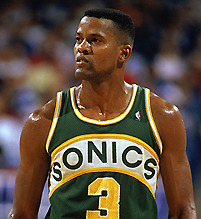 Ellis continued to star for the SuperSonics in the late 1980s, with his scoring average topping out at 27.5 point per game during the 1988-89 season. The 2,253 points he scored that season broke NBRPA Board Member Spencer Haywood's franchise record of 2,251 and remained the SuperSonics/Thunder record until Kevin Durant broke it in 2009-10. Ellis was selected to the NBA All-Star Game during the same season, and scored 27 points for the West. In all, Ellis spent four and a half seasons with the SuperSonics before once again being traded, this time to the Milwaukee Bucks.

While he was again a bench player with the Bucks, his minutes still remained relatively high and Ellis still made large contributions to the team with his scoring ability. Following the conclusion of the 91-92 season, he found himself traded to the San Antonio Spurs for Tracy Murray. As a member of the Spurs, Ellis once again found himself in the starting lineup playing slightly more minutes than he did as a Buck. Although his production largely remained the same, he was doing it much more efficiently, shooting nearly 50% from the field as opposed to 46% with Milwaukee.

Ellis also played for the Denver Nuggets, had another stint with the SuperSonics, played with the Bucks and Charlotte Hornets to end his career.

Dale is also a Marietta, GA native and currently resides there today.