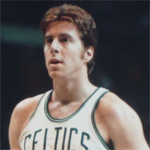 Dave Cowens earned a berth in the Basketball Hall of Fame because of his tenacity and work ethic as a mainstay of the Boston Celtics in the 1970s, leading the team to NBA Championships in 1974 and 1976. Playing in the era of Julius "Dr. J" Erving, Wilt "the Stilt" Chamberlain, and "Pistol Pete" Maravich, Cowens didn't possess the flash and glitz of those high-profile superstars. Instead, it was Cowens' consistency, work ethic, unselfishness, versatility and energy that established him as one of the most solid and respected centers in recent NBA history.

Of his 11 years in the league, all but one was spent with the Boston Celtics. An unlikely hero in a sport dominated by men of greater size and natural ability, the red-haired lefthander relied on hustle and heart to achieve NBA greatness. His determination helped to resurrect a Celtics dynasty presumed dead after the departure of legend Bill Russell. Cowens ultimately joined his venerated predecessor in the Hall of Fame, a feat he never dreamed of achieving.

Thought a native of Newport, Ky., Cowens left the Bluegrass State and headed south to Florida State after averaging 13 points and 20 rebounds per game as a senior at Newport Catholic High School. Cowens continued to rebound as a Seminole, pulling down 1,340 boards during his three varsity seasons in Tallahassee. He also scored 19.0 points per game and shot .519 from the floor.

Celtics General Manager Red Auerbach realized that he needed someone to at least attempt to fill the shoes of Bill Russell, whose retirement after the 1968-69 championship season left the Celtics a team that could only muster 34 wins the following year, despite the presence of the great John Havlicek. He liked Cowens' hard-working attitude and work ethic, so Boston made Cowens the fourth overall pick in the 1970 NBA Draft.

Cowens averaged 17.0 points and 15.4 rebounds as a rookie, the most ever by a first-year Celtics player besides Bill Russell. Cowens' achievements earned him a share of the NBA Rookie of the Year honors, with Geoff Petrie of the Portland Trail Blazers. The Celtics improved to 44-38, and Cowens quickly won accolades for his hustle, mobility, tenacity and unselfish approach to the game.

Cowens improved to 18.8 points per game on .484 field goal shooting in his second NBA season as the Celtics adjusted to life without Russell. In his first of seven All-Star Game appearances, Cowens scored 14 points and pulled down a game-high 20 rebounds.

In the 1972-73 campaign, Boston honed its fast break while Cowens perfected his rebounding skills, averaging 16.2 boards. Playing in every game and logging 41.8 minutes per night, Cowens posted a career-high average of 20.5 points. In just his third season, Cowens joined legends Bob Cousy and Bill Russell as the only Celtics to win the league's Most Valuable Player Award.

"Celtics Pride" returned to full bloom in 1973-74, a year in which Cowens averaged 19.0 points, 15.7 rebounds and 4.4 assists, leading Boston to a 56-26 record and the NBA Championship. The word "dynasty" was once again used to describe the Celtics as the team's winning ways continued through the mid-1970s, including a second league crown for Cowens-led Boston in 1976.

Cowen had a successful coaching career after his playing days, though he actually began his coaching career as player/coach for the Boston Celtics during the 1978-79 season.  Cowens coached the Bay State Bombardiers of the Continental Basketball Association in 1984-85. From 1994-1996 he served as an assistant coach for the San Antonio Spurs and finally became head coach of the Charlotte Hornets from 1996-1999 and Golden State Warriors from 1999-2001. In 2005 Cowens crossed over to the WNBA and coached the Chicago Sky for the beginning of the 2006 season, before joining the Detroit Pistons as an assistant.

Cowen’s was elected to the Naismith Memorial Basketball Hall of Fame in 1991 and is a Founder of the NBRPA.