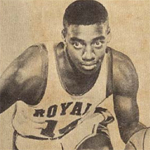 Oscar Robertson, also known as "The Big O", is considered the greatest all-around player in the history of basketball. As a players’ advocate, he has left his mark on professional sports in the courtroom as well as on the court. A consummate leader, he also has distinguished himself as a social activist, a mentor and teacher, a business owner, and a philanthropist.

On the court, the 6-foot-5 Robertson set new standards of excellence at every level. The first big point guard who could score from anywhere, rebound, pass, and play defense; he created a template for later stars. In 1998, the U.S. Basketball Writers renamed their Player of the Year award "The Oscar Robertson Trophy". In 2000, he was named “Player of the Century” by the NABC.

As president of the NBA Players Association from 1965-74, he made an even bigger impact on basketball with a class action anti-trust lawsuit against the NBA. A 1976 settlement, known as the "Oscar Robertson Rule", helped NBA players become the first major professional athletes to achieve free agency. In 1992, Robertson co-founded the NBRPA and served as its first president until 1998.

Robertson was born in Charlotte, Tenn. and raised in Indianapolis, where he graduated in the top 10 percent of his class at Crispus Attucks High School. He led the Attucks to two consecutive state titles – the first for an African-American or an Indianapolis school – and a national championship, the first by an African-American school in any sport. As a senior, he was Indiana’s “Mr. Basketball” and national high school player of the year.

At the University of Cincinnati, "The Big O" earned a business degree in four years and led the Bearcats to the 1959 and 1960 Final Fours. A three-time first team All-American, he was the NCAA’s first three-time scoring leader and the first to win College Player of the Year honors three times. Following graduation, he co-captained the Pete Newell-coached 1960 U.S. Olympic gold medal team. He is listed among the NCAA’s all-time leading student athletes, and in 2007, was awarded an Honorary Doctorate of Humane Letters by the University of Cincinnati.

In 1997, "The Big O" performed the assist of a lifetime when he donated a kidney to his daughter Tia. Since then, he has served as an advocate for health and wellness, organ transplantation and kidney disease prevention on behalf of the National Kidney Foundation.

One of the nation’s leading small business owners, Robertson is the CEO of companies in the areas of specialty chemicals, document management, processed foods and media. He holds a Lifetime Achievement Award for entrepreneurship from the University of Cincinnati, also where the Oscar and Yvonne Robertson Scholarship Fund assists deserving minority students.

Robertson is the author of autobiography, “The Big O: My Life, My Times, My Game,” and “The Art of Basketball”.