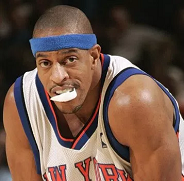 Jerome “Junk Yard Dog” Williams is a 6-foot-9 power forward from Washington D.C. Williams played at Georgetown University in the mid-1990s before being selected by the Detroit Pistons in the first round, 26th overall, of the 1996 NBA draft. He played nine years in the NBA with the Pistons, Toronto Raptors, Chicago Bulls and New York Knicks. His 9.9 rebound average in 1999, while coming off the bench, still remains one of the top in NBA history.

Williams was known around the league for his defense and on-the-court toughness, which led to his nickname “Junk Yard Dog.” A natural leader, Williams was a fan favorite in every city he played for and served as Vice President for the National Basketball Players Association.

Williams retired in 2005 and was hired as lead studio analyst for the MSG Cable Television Network’s NBA coverage, including the NBA Championship. He later went on to become the head coach at Findlay Prep in Henderson, Nevada, a national powerhouse that has produced a number of athletes who have gone on the play in the NBA.

Williams is known for being community service oriented with a passion for steering kids into activities that help them realize their full potential, whether it be preparing for college or for other careers. Williams also serves as President of the NBRPA’s Las Vegas Chapter.