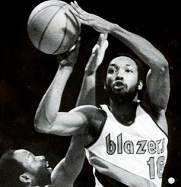 There are few people who have been as heavily involved in the NBA as Johnny Davis. Coach Davis spent nearly four decades with the NBA as a player, front office executive, assistant and head coach.

A Detroit native, Davis attended high school at Murray-Wright and was coached by the Legendary George “Baby” Duncan and Paul Dean. He quickly earned a reputation as one of the finest guards in the Detroit area, earning All-City, All-State and All-American honors and was voted as one of the top 10 players of all time in the Detroit Public School League. Davis was recruited by more than 350 major basketball schools across the country.

After his junior year of college, Davis was drafted in the second round (22nd) of the 1976 NBA draft by the Portland Trailblazers where he played for Hall of Fame Coach, Jack Ramsey. He played 10 seasons in the NBA and was a key member of the 1977 Championship team. His career also included stints in Indiana, Atlanta and Cleveland. Davis concluded his playing career with 9,710 points scored, 3,368 assists and 683 steals.

Following his retirement as a player, Davis accepted a front office executive position with the Atlanta Hawks as Director of Community Affairs. Davis quickly moved up the ranks and was promoted to Assistant to the President and eventually President of the Atlanta Hawks Foundation. During his appointment, Davis spearheaded a philanthropic initiative that raised $500,000 in support of Atlanta area homeless shelters.

After a three year stint with the Hawks, Davis returned to the court as a coach. He began his coaching career as an Assistant for the Atlanta Hawks and has since worked for the Los Angeles Clippers, Portland Trailblazers, Philadelphia 76ers, New Jersey Nets, Orlando Magic, Minnesota Timber Wolves, Indiana Pacers, Memphis Grizzlies, Toronto Raptors and the Los Angeles Lakers. To date, Davis has worked for over one third (11) of the 30 NBA teams.