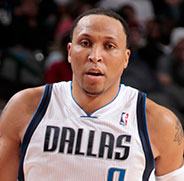 Shawn Dwayne Marion (born May 7, 1978) is an American retired professional basketball player who played 16 seasons in the National Basketball Association (NBA). In a career that spanned five teams, Marion earned NBA All-Star honors four times and won an NBA championship in 2011. Nicknamed "The Matrix" by TNT analyst Kenny Smith during the pre-season of his rookie year, he was widely regarded as one of the most versatile players in the league because of his athleticism and ability to play and defend many positions. He was also known for his unorthodox shooting form.

EARLY LIFE
Marion was born in Waukegan, Illinois and played high school basketball in Clarksville, Tennessee at Clarksville High School, where he was a teammate of future NBA player Trenton Hassell.

After high school, he played collegiate basketball at Vincennes University, a junior college in Indiana, for two years before transferring to the University of Nevada, Las Vegas in 1998. In his second year with Vincennes, Marion played 36 games and averaged 23.5 points and 13.1 rebounds. He was also the 1998 NJCAA Male Student Athlete of the Year.

In 2005, Marion was named a reserve on the Western Conference All-Star Team and selected to the 2004–05 All-NBA Third Team. That year he became the first player since David Robinson in 1991–92 to average in the top five in rebounding and steals since the league began tracking steals in 1973, a feat he repeated in 2005–06. During the 2005 All-Star Weekend, Marion teamed up with WNBA Rookie of the Year Diana Taurasi of the Phoenix Mercury, and Suns legend Dan Majerle in the RadioShack Shooting Stars to run away with the title. Marion was also selected as a Western Conference reserve on the 2006 All-Star team, and the 2007 All-Star team.

The 2005–06 NBA season was perhaps the best season of his career. He was the only player in the NBA ranked in the top 20 in points, rebounds, steals, blocks, field goal percentage and minutes. He finished the season leading the Suns in points per game (21.8), rebounds per game (11.8), blocks per game (1.7), and steals per game (2.0). Marion also ranked 3rd in efficiency. He helped fill in the void left by star Amar'e Stoudemire, who missed nearly the entire season due to injury. Marion also earned a spot in the NBA All-Star Game for the third time.

During the 2006–07 season, only Marion and superstar Kevin Garnett ranked in the top 40 in points per game, rebounds per game, field goal percentage, blocks per game, steals per game, and minutes per game. He was named to his fourth NBA All-Star Team and collected 18 points, eight rebounds, four assists and two steals in 22 minutes in his hometown of Las Vegas at the 2007 contest.

Following a summer filled with rumors and trade speculation involving possible deals with the Boston Celtics, Los Angeles Lakers, and Utah Jazz, Marion requested a move. Citing the rumors and a refusal on the part of Phoenix management to negotiate a contract extension, Marion called his relationship with the Suns a "bad marriage", and stated in September 2007 it was time for him to leave Phoenix. By the start of the season, though, Marion continued to play well for the Suns.

Miami Heat
On February 6, 2008, the Phoenix Suns traded Shawn Marion and teammate Marcus Banks to the Miami Heat for center Shaquille O'Neal. His last basket with the Heat was a game-winning dunk against the Chicago Bulls.

Toronto Raptors
On February 13, 2009, Marion was traded to the Toronto Raptors along with Marcus Banks and cash considerations for Jermaine O'Neal, Jamario Moon and a future conditional draft pick.

On April 13, 2011, Marion became the fifth man to compile 1,500 steals and 1,000 blocks in the NBA. He joined Hakeem Olajuwon, Karl Malone, Kevin Garnett and Julius Erving in the exclusive club.

In the 66 game 2011–12 season, Marion led Dallas in rebounding with 7.4 rebounds per game. Marion was the only player in the NBA 6-foot-7 or shorter to lead his team in rebounding in 2011–12. He also led Dallas in double-doubles with 12. Marion scored 29 points against his former team, the Phoenix Suns, on January 23, 2012, which tied his highest-scoring game as a Maverick. Marion moved into 100th place on the NBA's all-time scoring list on March 3.

Marion appeared in his 1,000th career regular-season game against the Suns on December 27, 2012. In January 2013, Marion was fined $25,000 by the NBA for publicly criticizing officiating. After an overtime loss to the Oklahoma City Thunder, he said, "It's hard to beat anybody when you're playing five on eight." Marion passed Rod Strickland for 25th place on the NBA's all-time steals list on March 6, 2013. Marion led the Mavericks in rebounds again with 525 (7.8 per game).

After missing 13 straight games with a strained left hip, Marion returned to action on March 16 against the Miami Heat. In eight minutes off the bench, he recorded five points and one rebound in the 92-106 loss.

Retirement
On June 18, 2015, following the Cavaliers' NBA Finals loss to the Golden State Warriors, Marion announced his retirement from the NBA after 16 seasons.