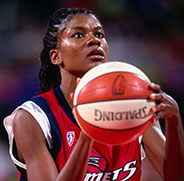 WNBA Hall of Famer, Olympian and Champion Speaker and Philanthropist

Sheryl Denise Swoopes, born March 25, 1971, was the first player to be signed in the WNBA when it was created in 1996. Swoopes won three Olympic Gold Medals and is a three-time WNBA MVP and was elected to the Naismith Memorial Basketball Hall of Fame in 2016. Frequently referred to as the “female Michael Jordan,” Swoopes was
famous for both her offensive and defensive skills. Voted by fans as one of the Top 15 players in WNBA history, Swoopes was a trailblazer in the WNBA making way for the next generation of female basketball athletes.Swoopes was the first player in WNBA history to record a playoff triple-double and with all her accolades and skill set this led to Swoopes being the first women’s basketball player to have a Nike shoe named after her: the “Air Swoopes”. Swoopes is now working on her non-profit, Back to Our Roots, hosting basketball clinics and speaking across the world as a motivational speaker and mentor.