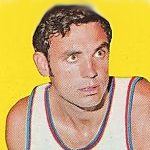 An NBA Hall-of-Famer and one of the NBA’s 50 Greatest Players of All-Time, Dave DeBusschere was known for aggressive defensive play that earned him NBA All-Defensive Team honors six times during his 12-year playing career. For his career, DeBusschere averaged 16.1 points and 11 rebounds per game, won two NBA Championships as a member of the New York Knicks and was named to eight NBA All-Star teams. He is memorialized by the NBRPA through the Dave DeBusschere Scholarship Fund.

DeBusschere, also known as “Big D", shared a love for both basketball and baseball at a young age. A Detroit native, he was a two-sport star at Austin Catholic High School. He led his high school basketball team to a state championship and also won a city and junior national championship as a standout baseball pitcher. When it came time for college, DeBusschere had his pick of schools, but he turned down the big names to stay home and attend the University of Detroit.

During his four years in college, DeBusschere averaged 24.8 points per game, led his team to the NCAA Tournament once and the NIT twice. After a successful college career, DeBusschere was faced with a tough decision to choose between his two passions: Baseball or basketball.

A precursor to two-sport stars like Bo Jackson or Deion Sanders, DeBusschere  tried his hand at both. He played professional baseball with the Chicago White Sox for four seasons, then turned his focus to the hardwood. The Detroit Pistons selected DeBusschere in the 1962 NBA Draft. Earning a spot on the All-Rookie Team his first year, he averaged 12.7 points and 8.7 rebounds per game. Two years later, he was given the position of player-coach, a first in NBA history.

The coaching job was short-lived, as the 1968-1969 NBA season saw him being traded to the New York Knicks, where DeBusschere would go on to reach legendary status. DeBusschere brought his tenacity and hard-nosed defense to a Knicks team that won the NBA Championship in both 1970 and 1973. To this day, he is regarded as one of the greatest and most talented power forwards the league has ever seen.

After retiring from basketball in 1974, DeBusschere remained very involved in the game. During the 1980s, he was the commissioner of the ABA, as well as the assistant coach and director of basketball operations for the Knicks. He added to his legend when the Knicks won the NBA’s first draft lottery and DeBusschere selected Patrick Ewing No. 1 overall. In addition, he went on to author "The Open Man," which chronicled the New York Knicks 1969-1970 Championship Season.

On May 14, 2003, DeBusschere passed away in New York at the age of 62. He will forever be remembered as one of the greatest NBA players of All-Time. The NBRPA established a scholarship fund in 1992 and renamed the fund to honor DeBusschere after his death. A flagship program for the NBRPA’s Legends Care philanthropic arm, the Dave DeBusschere NBRPA Scholarship Fund is dedicated to providing opportunities for higher learning. This program awards college scholarship dollars to former professional basketball players and their children to help meet the rising costs of higher education. Through the Dave DeBusschere Scholarship Fund, the NBRPA has donated more than $1 million in scholarship money to former players and their children.