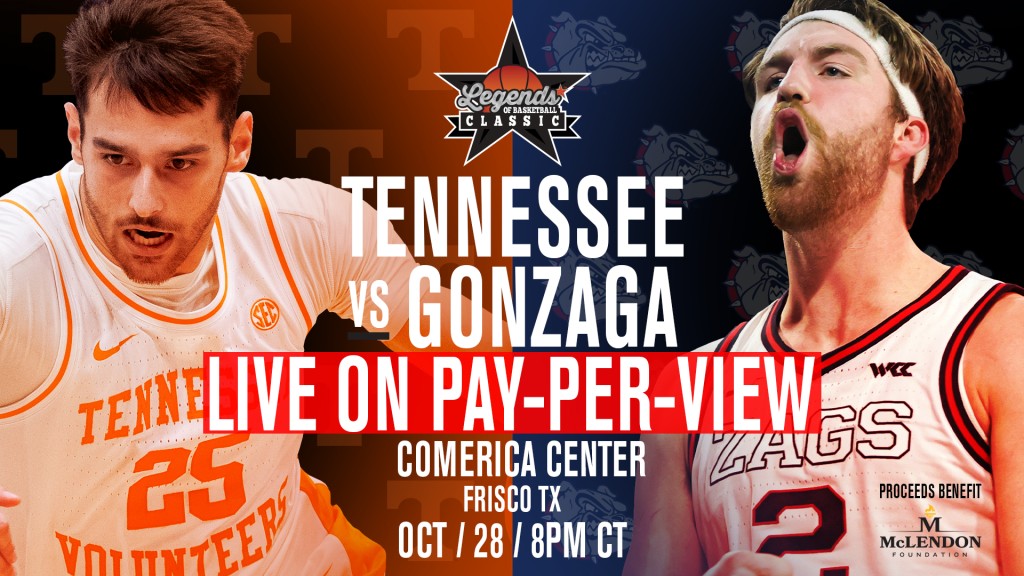 Tipoff set for 8 p.m. CT Friday live on pay-per-view via iNDEMAND and PPV.COM

FRISCO, Texas (Oct. 24, 2022) - Powerhouse college basketball programs Gonzaga and Tennessee, both of whom have high expectations as the 2022-23 season draws near, will play in the inaugural Legends of Basketball Classic, a charity exhibition game on Friday at the Comerica Center in Frisco, Texas. The game is set for 8 p.m. CT and iNDEMAND – the largest distributor of PPV and on demand programming in North America – will serve as the exclusive streaming and TV distributor of the event. Proceeds from the event will benefit the McLendon Foundation.

iNDEMAND will carry the game in the U.S. and Canada through cable, satellite, and telco PPV providers and will also make the event available worldwide on its streaming service PPV.COM, the first PPV streaming service to offer interactive fan engagement during live-action sports events. Customers can also order the event on TV through their cable, satellite, or telco providers, including Xfinity, Spectrum, DirecTV, Contour, Dish, Verizon Fios, Altice, and other leading providers. The suggested retail price is $9.99 on all PPV platforms.

“Not only is this a chance to see two outstanding college basketball teams and Final Four contenders, Gonzaga and Tennessee, early in the year, but the game is also being played for a great cause,” said Fran Fraschilla, longtime college basketball analyst and former head coach who will work the telecast. “This game will recognize many of the incredible contributions that Hall of Fame coach John McLendon has made to the game of basketball and will directly benefit the McLendon Foundation.”

Gonzaga returns All-American and Player of the Year candidate Drew Timme along with a bevy of contributors, including starters Rasir Bolton and Julian Strawther, from last season’s team that went 28-4 and spent nine weeks at No. 1 in the Associated Press poll. The AP preseason poll released on Oct. 17 has the Bulldogs ranked 2nd in the nation.

Tennessee returns four of its top-five scorers from last season’s team that finished 27-8 overall, won the SEC Tournament and made a fourth consecutive NCAA Tournament appearance. The AP preseason poll released on Oct. 17 has the Volunteers ranked No. 11 in the country.

The McLendon Foundation was established in 1999 by National Association of Collegiate Directors of America (NACDA) to honor the legacy of Hall of Fame coach John McLendon who was a pioneer in the field of athletics, the game of basketball, and the civil rights arena. The McLendon Foundation’s mission is to empower and develop minorities who aspire to be principled leaders in athletics administration by providing educational resources and access to a life-long community of mentors. All organizational planning for the Foundation directly aligns with the values of Coach McLendon: Integrity, Education, Leadership and Mentorship. More information can be found at www.minorityleaders.org.

HOW TO WATCH ‘LEGENDS OF BASKETBALL CLASSIC’ ON PPV