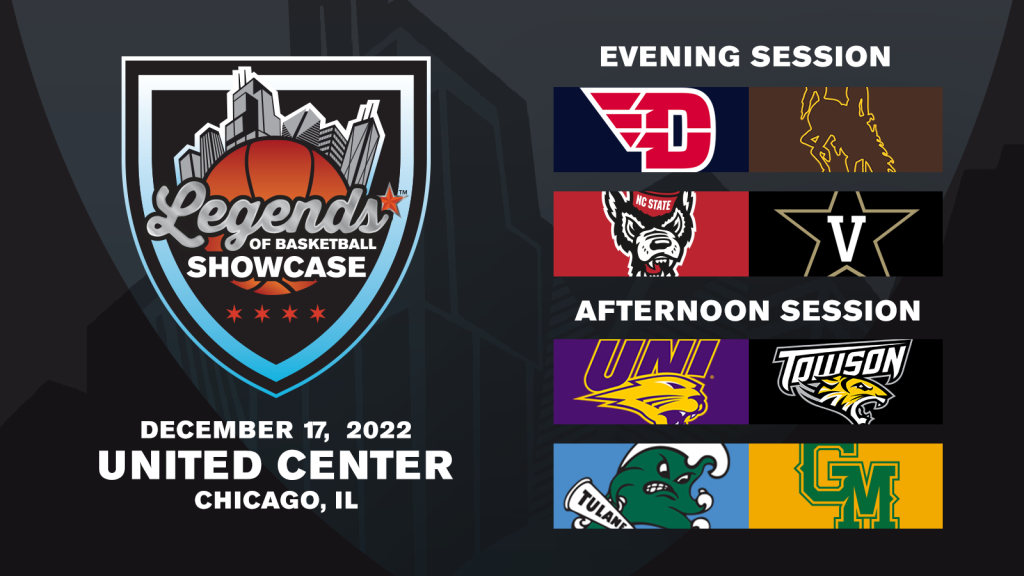 As part of the four-game set, Northern Iowa will face Towson and Tulane will take on George Mason in the afternoon session, while Dayton matches up against Wyoming and NC State will battle Vanderbilt in the evening session. Game times and television designations will be announced at a later date.

Tickets for the 2022 Legends of Basketball Showcase will go on sale to the general public on Sept. 21 and will be sold by session. For those looking to experience all four games, a purchase of the afternoon session and evening session will be required. Fans interested in attending the event can register to receive direct email alerts regarding ticket news and other event at www.LegendsofBasketball.com/Showcase. Those who register for these ticket alerts will be eligible for access to an exclusive one-day presale beginning on Sept. 20.

Founded in 1992, the NBRPA serves former professional basketball players in their transition into life after basketball.  The NBRPA is the only alumni association of its kind supported directly by the NBA and National Basketball Players Association (NBPA).

“The NBRPA is thrilled to partner with Intersport to present the Legends of Basketball Showcase for the upcoming college basketball season,” said Scott Rochelle, President & CEO NBRPA. “With NBRPA membership, including several executive board directors having deep ties to the participating college basketball programs, this event is a natural fit for us to bring to fruition. We look forward, to what promises to be an extraordinary day and night of top-notch college hoops entertainment.”

“Intersport is excited to partner with the NBRPA and help them extend their already well-established presence in the basketball community,” said Mark Starsiak, vice president of basketball at Intersport, which will manage the event. “As we continue to grow our robust portfolio of successful basketball events around the country, we are eager to create a major annual showcase event alongside another Chicago-based organization right here in our hometown.”

The eight programs competing in the Legends of Basketball Showcase have produced a combined 204 NBA Draft selections, while several coaches participating in the event have connections to the NBRPA, and vice versa.

At the helm of Vanderbilt is 18-year NBA veteran Jerry Stackhouse, the former No. 3 overall draft pick and two-time All-Star who appeared in 970 games for eight teams. Wyoming assistant coach Shaun Vandiver is a former first-round pick (25th overall) by the Golden State Warriors in the 1991 NBA Draft. George Mason head coach Kim English was drafted in the 2nd Round (44th overall) of the 2012 NBA Draft by the Detroit Pistons and Northern Iowa assistant coach Seth Tuttle played for the Miami Heat’s Summer League team in 2015.

NBRPA Board Chairman Johnny Davis is a Dayton alum, leading the Flyers in scoring for three consecutive seasons (1973-76) before spending nearly four decades with the NBA as a player, front office executive, assistant and head coach. Additionally, two NBRPA Board Members are NC State alums. Thurl Bailey, who led the Wolfpack in both scoring and rebounding during the team’s miracle 1983 NCAA Championship season before embarking on a 13-season NBA career, and Chucky Brown, who led NC State in scoring in 1988 (16.6 ppg) and rebounding in 1989 season (8.8 rpg).

It will be the first matchup between Northern Iowa and Towson and the third between Tulane and George Mason, with the teams splitting the prior two contests. Dayton and Wyoming have also met twice previously, with Dayton winning in December 2004 and Wyoming winning in January 2004. The contest between NC State and Vanderbilt will be the sixth all time, with the Commodores owning a 3-2 edge in the series. Each of the previous three matchups have been neutral site contests, with NC State winning the last matchup in 2018.

About the National Basketball Retired Players Association
The National Basketball Retired Players Association (NBRPA) is comprised of former professional basketball players from the NBA, ABA, and WNBA. It is a 501(c) 3 organization with a mission to develop, implement and advocate a wide array of programs to benefit its members, supporters and the community. The NBRPA was founded in 1992 by basketball legends Dave DeBusschere, Dave Bing, Archie Clark, Dave Cowens and Oscar Robertson. The NBRPA works in direct partnerships with the NBA and the National Basketball Players Association. Legends Care is the charitable initiative of the NBRPA that positively impacts youth and communities through basketball. Scott Rochelle is President and CEO, and the NBRPA Board of Directors includes Chairman of the Board Johnny Davis, Vice Chairman Dave Cowens, Treasurer Sam Perkins, Secretary Grant Hill, Thurl Bailey, Caron Butler, Jerome Williams, Shawn Marion, Charles “Choo” Smith, Sheryl Swoopes and Robert Horry. Learn more at legendsofbasketball.com.

Since 1985, Intersport has been an award-winning innovator and leader in the creation of sports, lifestyle, culinary and entertainment-based marketing platforms. With expertise in Sponsorship Consulting, Experiential Marketing, Hospitality, Retail Engagement, Content Marketing, Productions and Property Creation, this Chicago-based Marketing & Media Solutions Company helps its clients engage consumers with compelling ideas, content and experiences.  To learn more about Intersport, visit www.intersport.global, like us on Facebook or follow us on Twitter and Instagram.